A visit to Mitsuwa always turn into a food trip for our family. We love that there is a variety of food to choose from their concessionaires. One of these is Omusubi Gonbei, they offer a mouth watering array of rice balls with various fillings. I was inspired to make this Spam Omusubi after seeing their various omusubi on display.

I have already featured several omusubi a.k.a onigiri recipes in this blog which shows how just how much we love it.

It’s easy to make this specially if you have an onigiri mold.

First, prepare your filling by frying several slices of spam until brown and crisp on the edges. Then cut to size that will fit inside your rice mold. 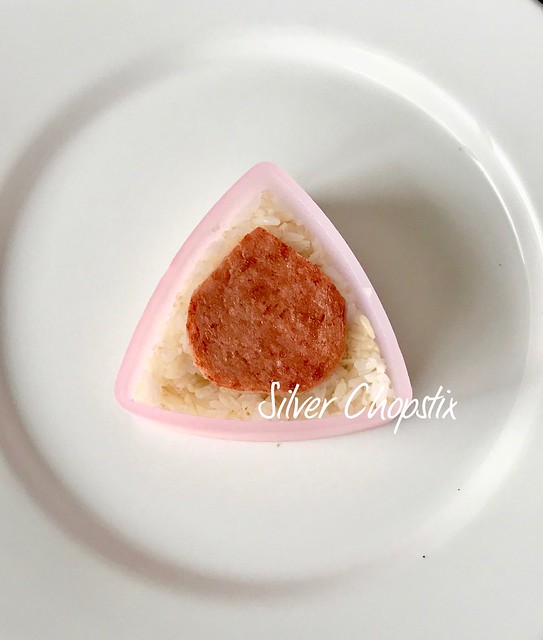 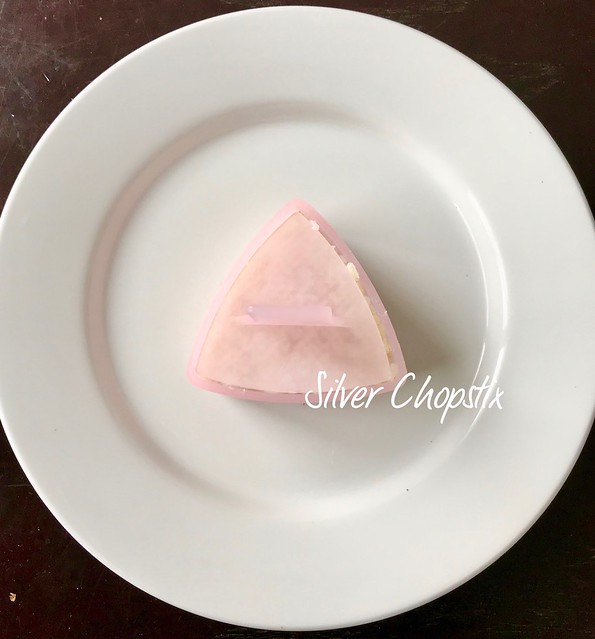 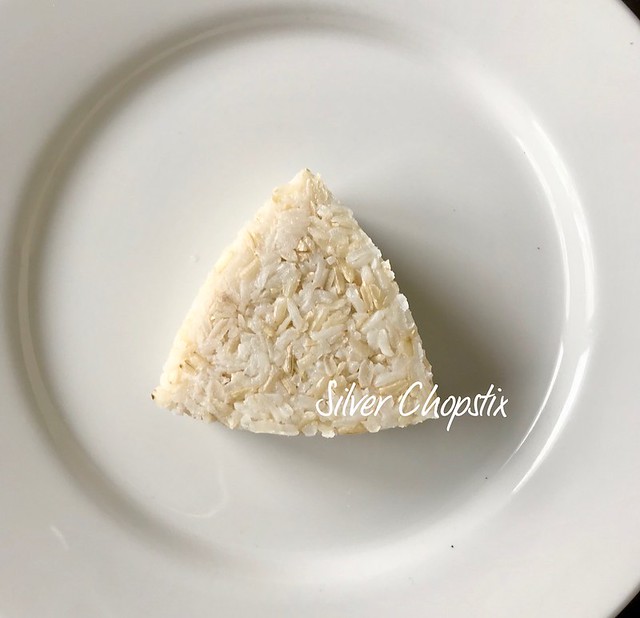 Take your onigiri mold and lay it on a plate. Add a couple of tablespoons of steamed white rice inside. Then place your spam filling in the middle. Add more rice on top of your filling and smoothen the top a bit. Place the lid on top and press down hard. Carefully remove your mold before releasing the lid. Sprinkle some furikake on top of your onigiri before wrapping with nori (seaweed).

You can place some pieces of spam bits on top of the rice ball for presentation. 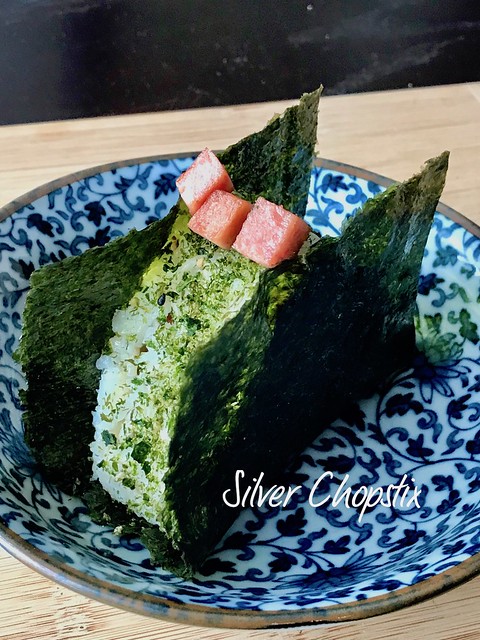 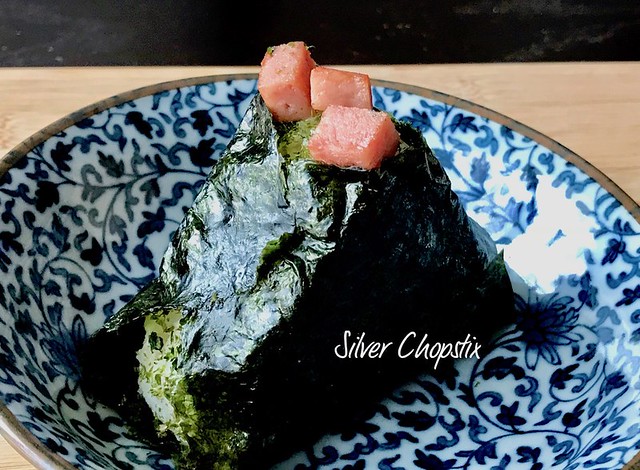 This is one of the easiest seafood recipe that you can make and with only three ingredients required. You will need a whole pompano, that has been thoroughly rinsed and patted dry with paper towels, salt and canola oil.

First, lay your fish in a cutting board and score it at a bias to create a checkerboard or crisscross pattern. Repeat on the other side. 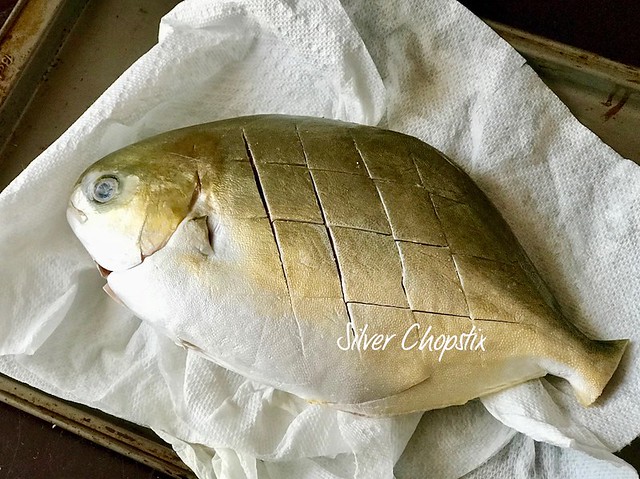 Turn on your oven broiler on high.

Place your pompano in a baking sheet covered with foil and coat both sides of your fish with 2 tbsp of canola oil. Next liberally season it with salt.

Place your fish under the broiler and cook until brown and crisp. Carefully watch your fish while cooking to prevent scorching or burning. You may need to turn your fish more than once to make sure it’s cooked evenly.

Serve immediately with a dipping sauce of lemon and soy sauce. 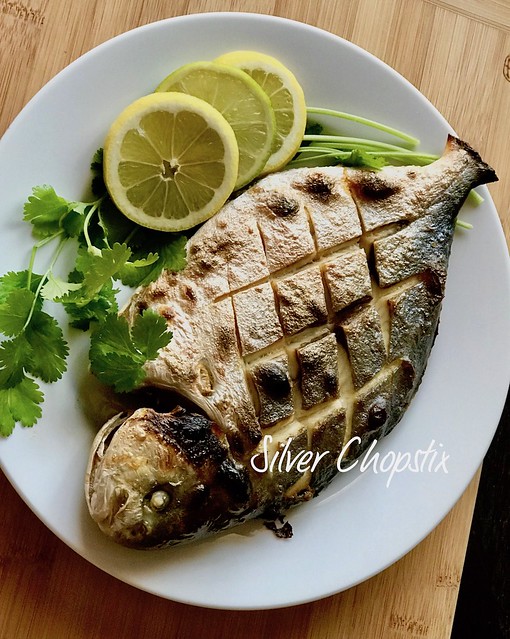 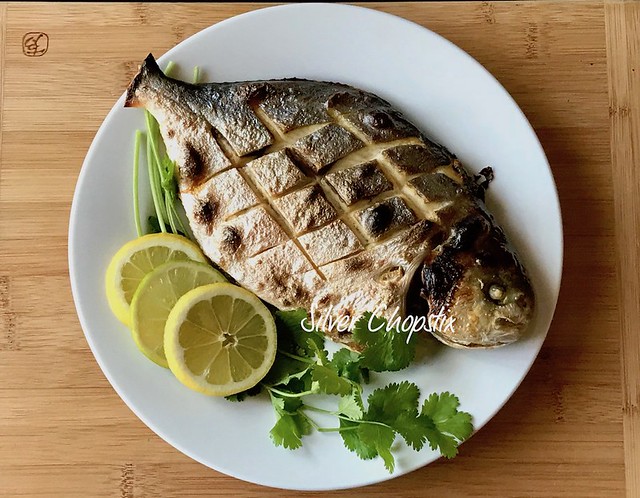 Filipinos almost always serve noodles in any celebratory occasion. This is most associated with birthdays, since noodles are symobols of long life and good health. There are several types of noodles Filipinos use to make pancit (stir fried noodles). The following are the most common ones: miki (made with egg), bihon (rice), sotanghon (mung bean) and canton (wheat).

For this recipe I used Canton noodles which are sold dried in plastic packages. The most popular brand is Excellent which is my Lola’s brand of choice . 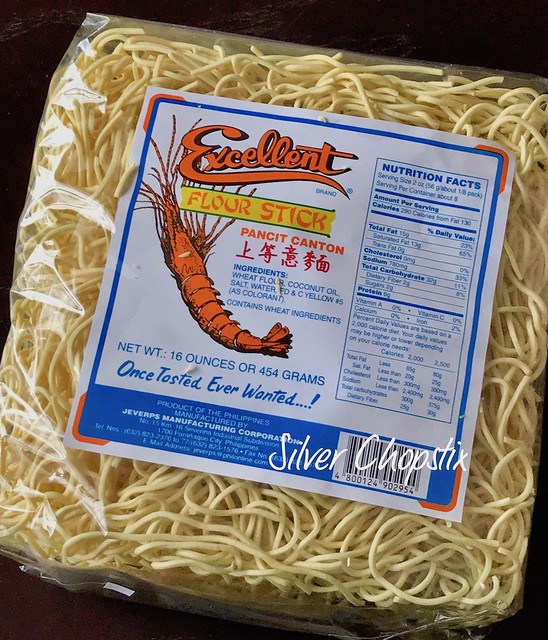 First, make some chicken stock by boiling 2 pieces chicken leg in 6 cups water, a sliced onion and some peppercorns. Let this come to a boil then lower heat and cook for about 40 minutes until chicken is done. Don’t forget to skim off the scum. Remove chicken pieces and when cool enough to handle, shred off meat from bone and set aside. Strain the broth and also set this aside.

Heat a wok or wide enough pan and add 2-3 tbsp. vegetable oil. Saute 1 medium sized diced onion and 3-4 cloves minced garlic. Let this cook until fragrant. Add 1 small carrot that has been julienned, a handful of chicharro (snap peas) and about half a cup of sliced dried shiitake mushrooms that has been dehydrated in water. Stir everything until well combined, then add half of a white cabbage that has been shredded. Cook until vegetables are crips tender, then remove from pan. In the same pan fry 2 pieces of Chinese sausages that has been sliced at a bias and cook until brown around the edges, then add your shredded chicken and cook until just heated through. Take sausages and chicken out of pan and set aside.

Pour about 6 cups of chicken stock that you have set aside earlier and let this come to a boil. Then season with 2 heaping spoonfuls each of soy sauce and oyster sauce. I used the ceramic Asian soup spoon to measure my seasonings. Then carefully add one package of pancit canton noodles and let the noodles soak in the broth. When the noodles are soft enough to handle stir the noodles and add your vegetables and meat. Make a cornstarch slurry to thicken the broth a bit and make for better gravy for your noodles. Carefully mix until everything is well combined and most of the liquid has been absorbed.

Serve hot with lemon slices on the side. 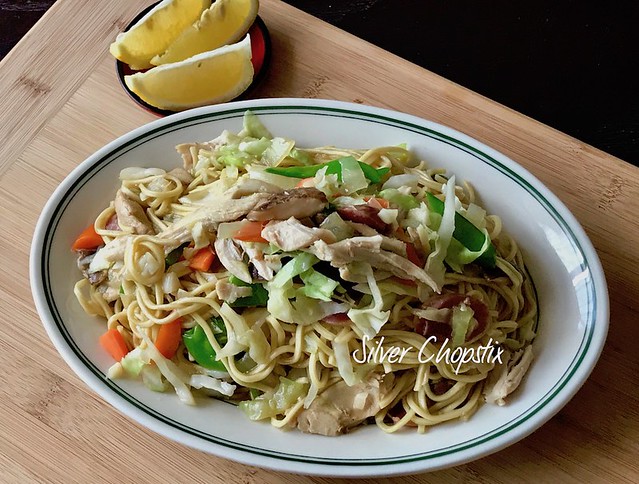 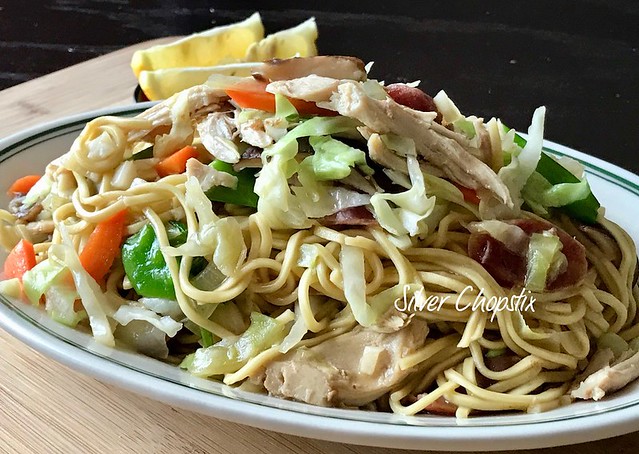