So I made a batch of gouda and sharp cheddar cheese pimiento spread a couple of days ago. I usually just use sharp cheddar but after trying Sam’s club version of this spread I know I needed to add gouda this time. Using sharp kind of cheese would also give you a deeper and more complex flavor. 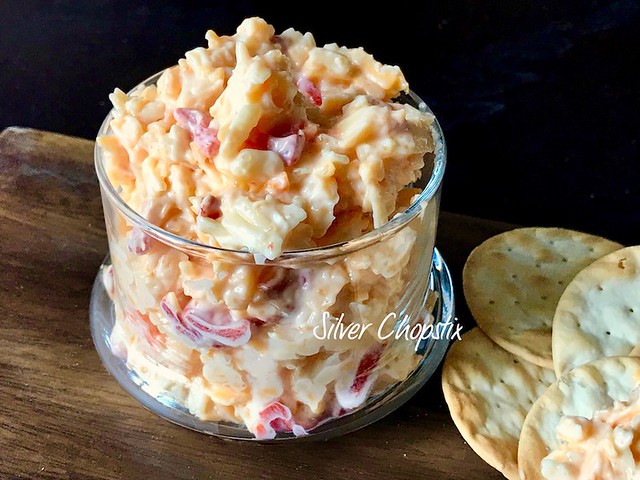 You can only have so much of pimiento on crackers and after making a big batch, I needed to find creative ways to use it. As it turns out making grilled cheese is just one of the endless possibilities.

To make, spread your cheese pimiento on some whole wheat bread or whatever kind you prefer, layer a couple of turkey bacon slices that has been browned then top with the other piece of bread. Heat a non stick skillet over medium heat and add a pat of butter, when it melts place your sandwich and let it brown. Then turn over and add another pat of butter. Cook until golden brown and cheese has melted. 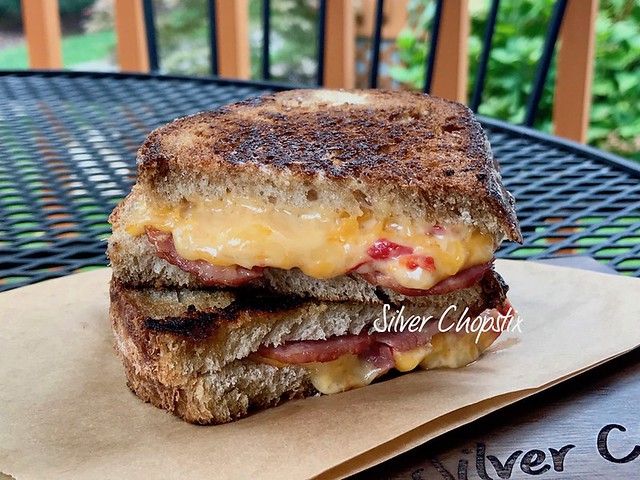 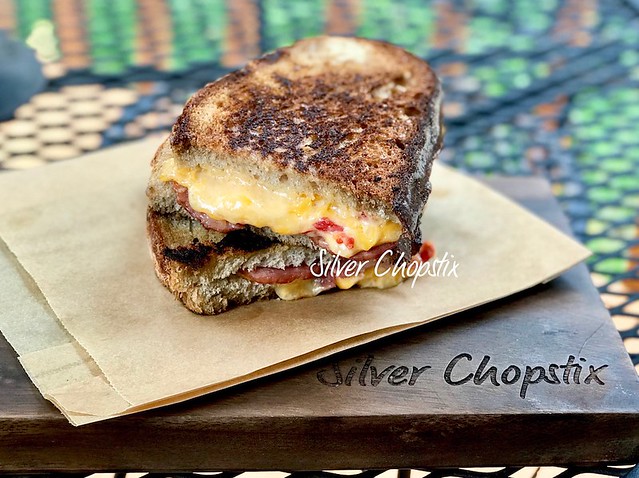 One of my favorites things to do in the Summer is going to our town’s farmer’s market. Tomatoes and Fresh basil are it’s best during this time of the year. I got a pint of cherry tomatoes for less than 4 dollars and a big bunch of basil for 2 dollars. The vendor suggested that I freeze the basil if I won’t be able to use most of it. 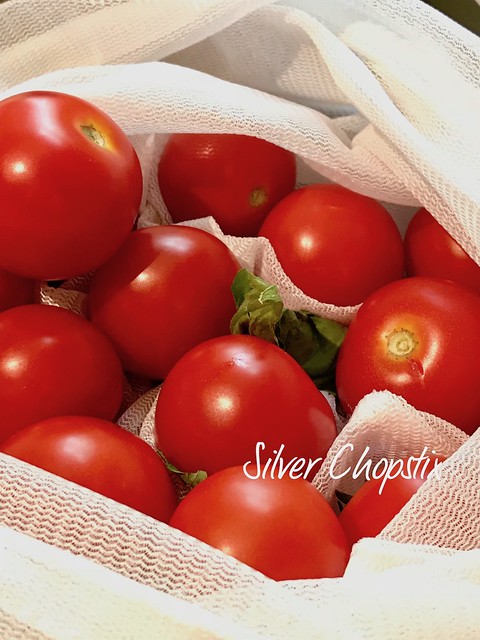 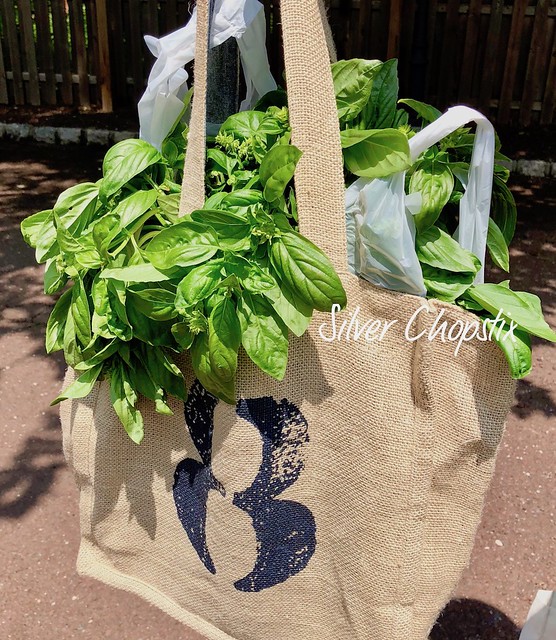 I already have pasta in mind when I bought all those produce from the farmer’s market. To make, cook a pound of spaghetti according to package directions, set aside about 1/4 – 1/2 cup pasta water. 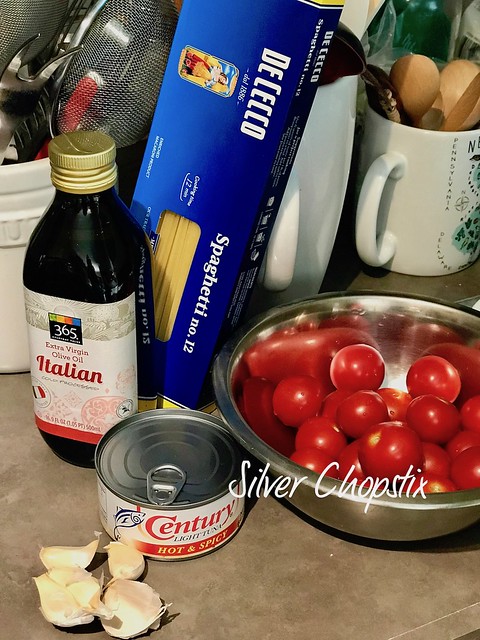 In a heated pan pour about a quarter cup extra virgin olive oil and add 5-6 cloves of finely minced garlic. Gently fry until fragrant and be careful not to burn it. Then add your cherry tomatoes that is cut in half. Cook until softened and starting to release it’s juices. Then add one can of Hot and Spicy Tuna. I used Century Tuna label which is a Filipino brand, you can use any canned tuna in oil. Carefully stir then add your cooked pasta with the reserved cooking water. Season with salt and pepper. Last, add a generous amount of basil and gently toss. Serve immediately. 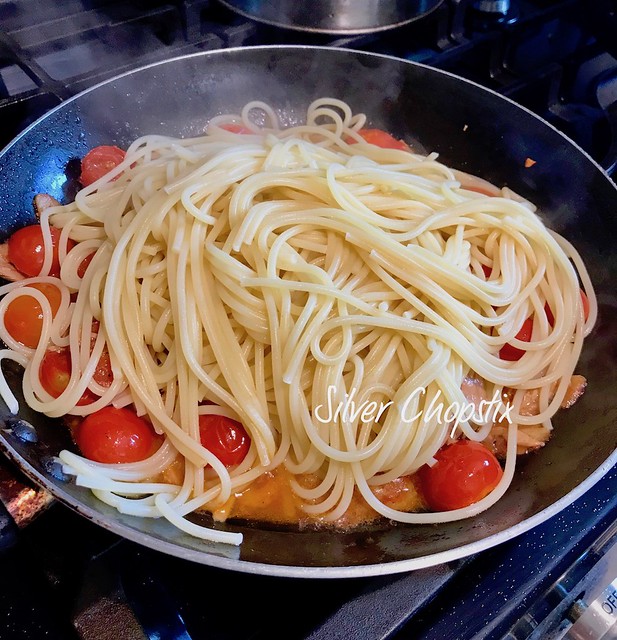 You don’t have to spend a lot to feed your family well. I spent less than 10 dollars for this tuna pasta dish which I served for lunch. 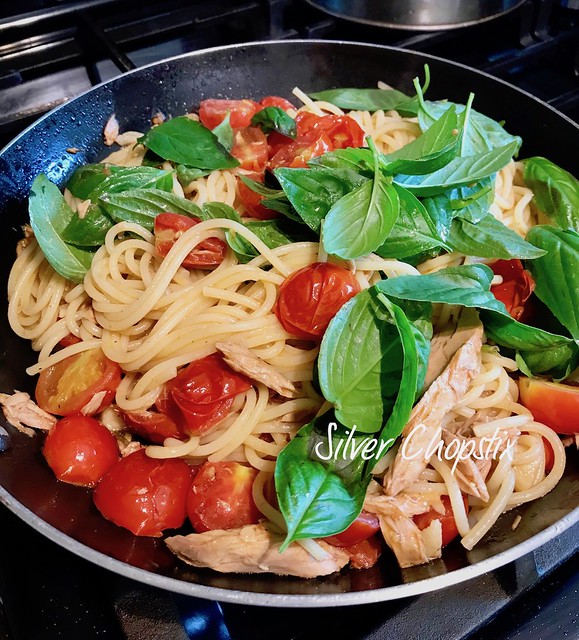 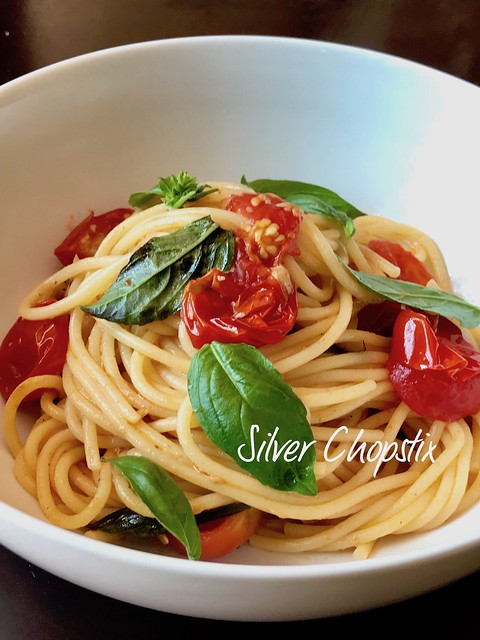 Pork adodo is one of my earliest blog post. It is one of the easiest dish to prepare if you have the right ingredients. For a heartier dish, most Filipinos would add hard boiled eggs to their adobo. In our family we do things differently, we always add sitaw or long beans. I grew up eating adobo prepared this way and loved it ever since. It pairs well with the flavors of soy and vinegar and gives you an extra boost of nutrients from the added greens.

You can get long beans in any Asian store . I still remember those times when this wasn’t readily available in our neck of the woods in the Northeast and I would just substitute green beans.

To make place a pound and a half of cubed pork butt in a pot. Add 1/2 cup Filipino soy sauce , 1/4 cup Filipino cane vinegar, 1/4 cup rice vinegar , 1-2 pieces bay leaf , 5-6 cloves garlic roughly chopped, 1 tsp or more of whole peppercorns . Let this come to a boil. Cover and lower heat and cook for about 40 minutes or until meat is tender. If to becomes too dry, add 1/4 cup water and continue cooking. Remove meat from the liquid and pan fry in a little oil until brown . Add your yard beans cut into 2 inch lengths and cook until crisp tender. Pour in the liquid/sauce from your adobo and simmer until it thickens a bit thickened. Note: I like using Lauriat brand Filipino soy sauce. I don’t recommend using kikkoman since it would drastically change the taste of your adobo. I also suggest that you use Filipino cane vinegar for this recipe. 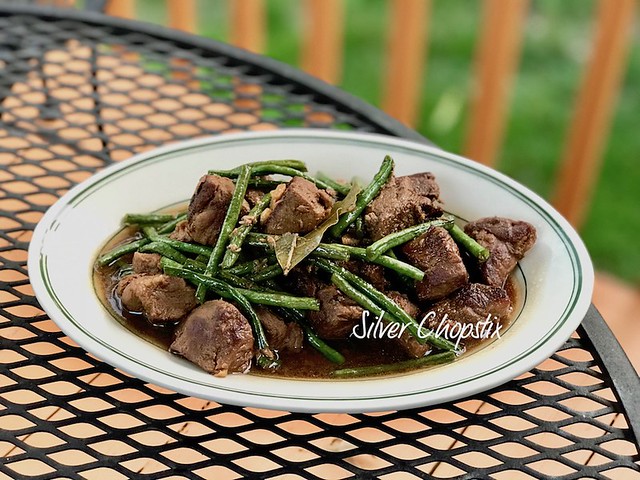 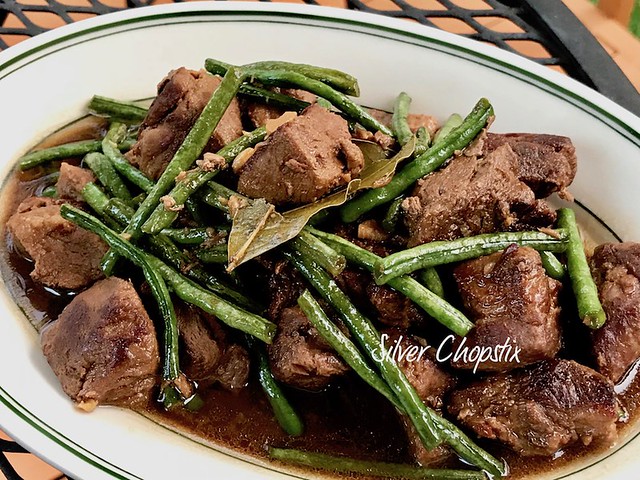 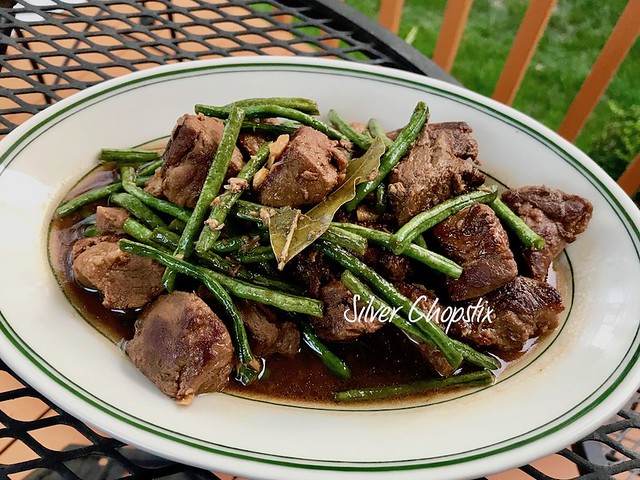 If Japan have ramen, the Philippines have mami. Noodles was introduced and was brought to us and Japan by the Chinese. As history has shown Filipino food is highly influenced by China. Noodles plays a big part in the Filipino food scene.

Chicken mami is considered merienda fare. Before burgers and pizza joints can be found in every street corner of Manila; chicken mami, lugaw, pancit are typically the choice for midafternoon snack.

Making the broth for chicken mami is very straightforward and not as complicated as the soup base for ramen. The traditional way of making the broth for mami is boiling bone in chicken meat in water with several aromatics and spices like onion, garlic, peppercorns and spring onion. I made my broth using leftover rotisserie chicken. First, get your chicken carcass and add about 6-7 cups water, then add 1 medium onion roughly chopped, 2 cloves of garlic, 1 Tbsp. of whole peppercorns. Let this come to a boil and then lower heat, cover and simmer for 45 minutes. Strain stock, keep warm and set aside.

Take a pack of fresh egg noodles and cook it by boiling in water for about 4-5 minutes. Drain and rinse in running water if you are not using it immediately.

Place your egg noodle in a deep bowl. Then arrange some shredded chicken breast (I used the leftover from my rotisserie chicken), boiled eggs cut in half, some spring onions and garlic chips on top. I also added a tablespoon of garlic oil as I found it enhanced the flavor of the soup. Then ladle some of your chicken broth and serve immediately. Note: I seasoned my chicken broth with a little bit of fish sauce for some umami. 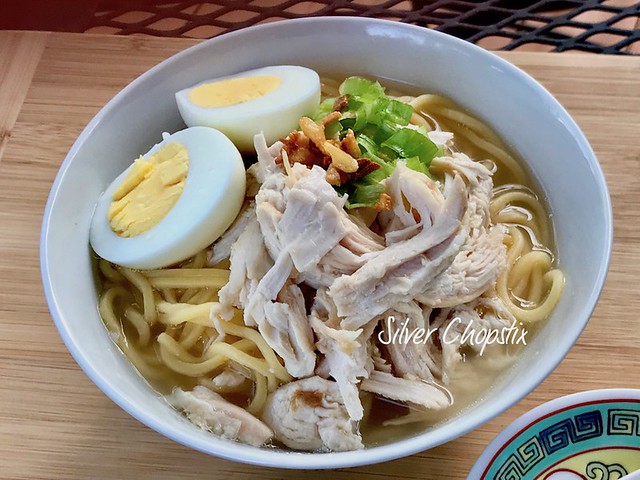 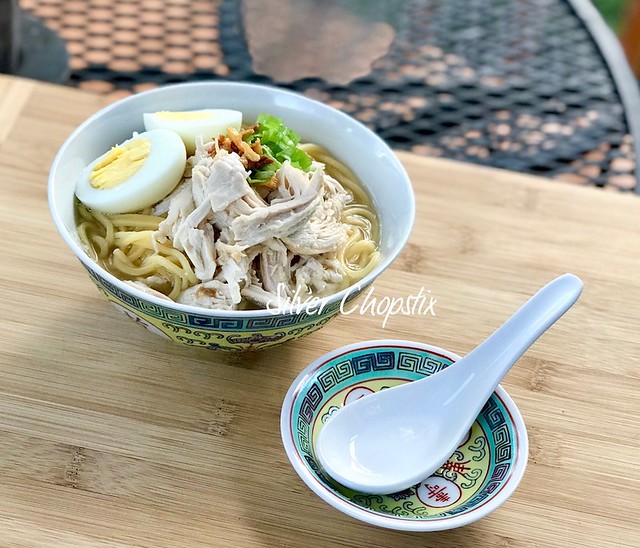 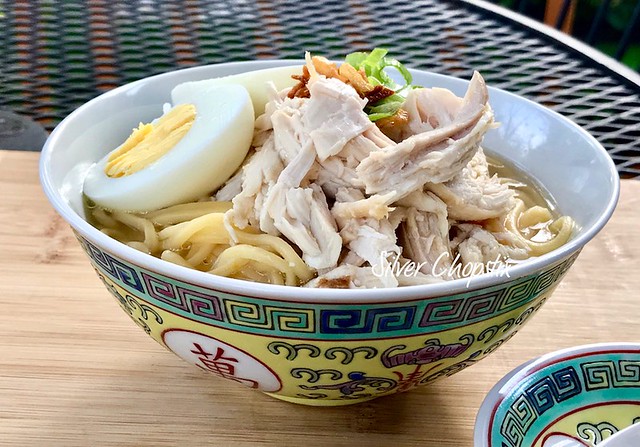