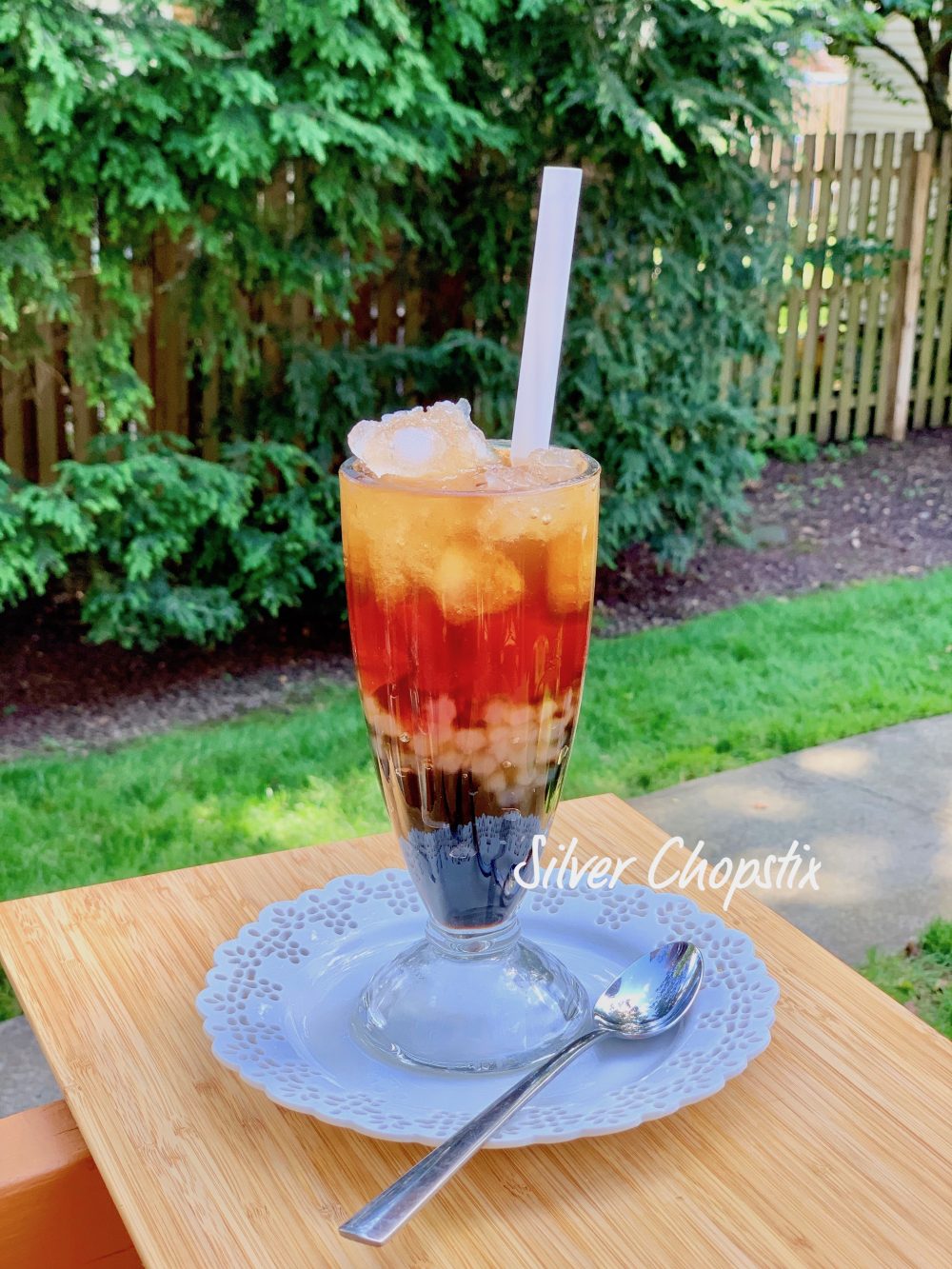 The Philippines have their own version of bubble drinks even before bubble tea drinks have become a craze. It’s called Sago at Gulaman. We call tapioca or boba, “sago”. This is a cooler that you can get anywhere in the country. It’s almost a standard beverage or drink that is ever present in most local restaurant menu. You can also get it from street vendors, fast foods chains and even high end Filipino restaurants have their fancy version of it. It is just sago that has been flavored or sweetened with “arnibal” or brown sugar syrup. I believe arnibal came from the Spanish word almíbar which literally means sugar dissolved in water and cooked over a fire until it has the consistency of syrup. In the same manner Arnibal is made by mixing equal parts of water and sugar (in this case brown sugar) and cooking over low heat until dissolved and has thickened considerably.

When we make this at home in the 70s we would only have sago in the drink, the addition of gulaman or jelly is somewhat the fancier version then. In the late 80s to the 90s black jelly or herbal jelly became popular and was added to the drink. Now it’s very common to get all three in your drink and this is what I have prepared. 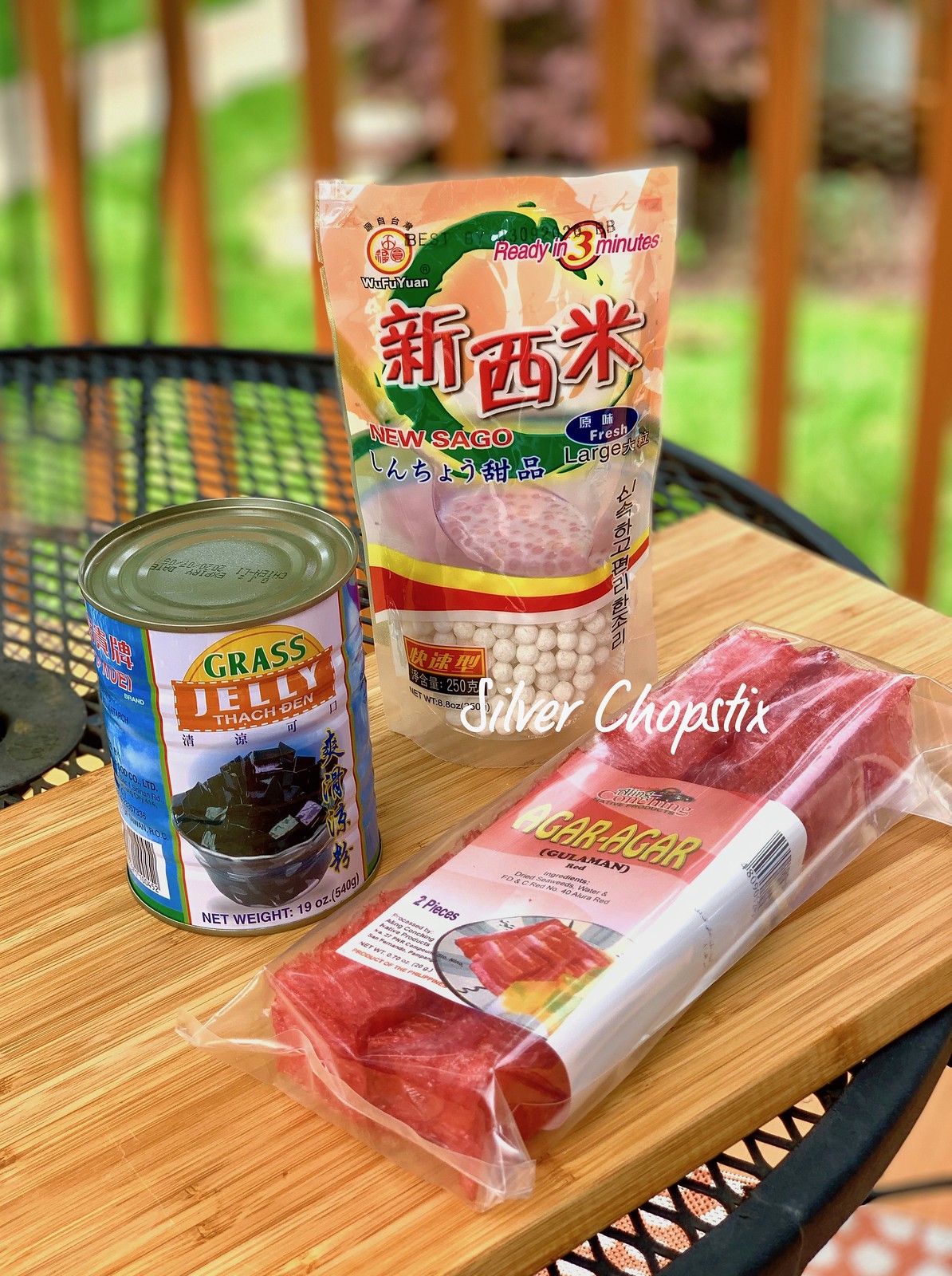 To make, prepare your arnibal by mixing 1 cup packed dark brown sugar and 1 cup water in a saucepan. Let it come to a boil, lower heat and cook until sugar has dissolved and mixture has thickened. Set aside.

Then cook your sago (I used white) according to package directions. When done add some a couple of tablespoons of arnibal and set aside.

Cut your black (herbal/grass) jelly into cubes. I just bought the canned ones found in Asian groceries.

For the jelly, we use the gulaman bars or agar-gar which has a firmer texture compared to using gelatin powder mix. Just prepare according to package directions. I made mine the day before since it needs time to set. 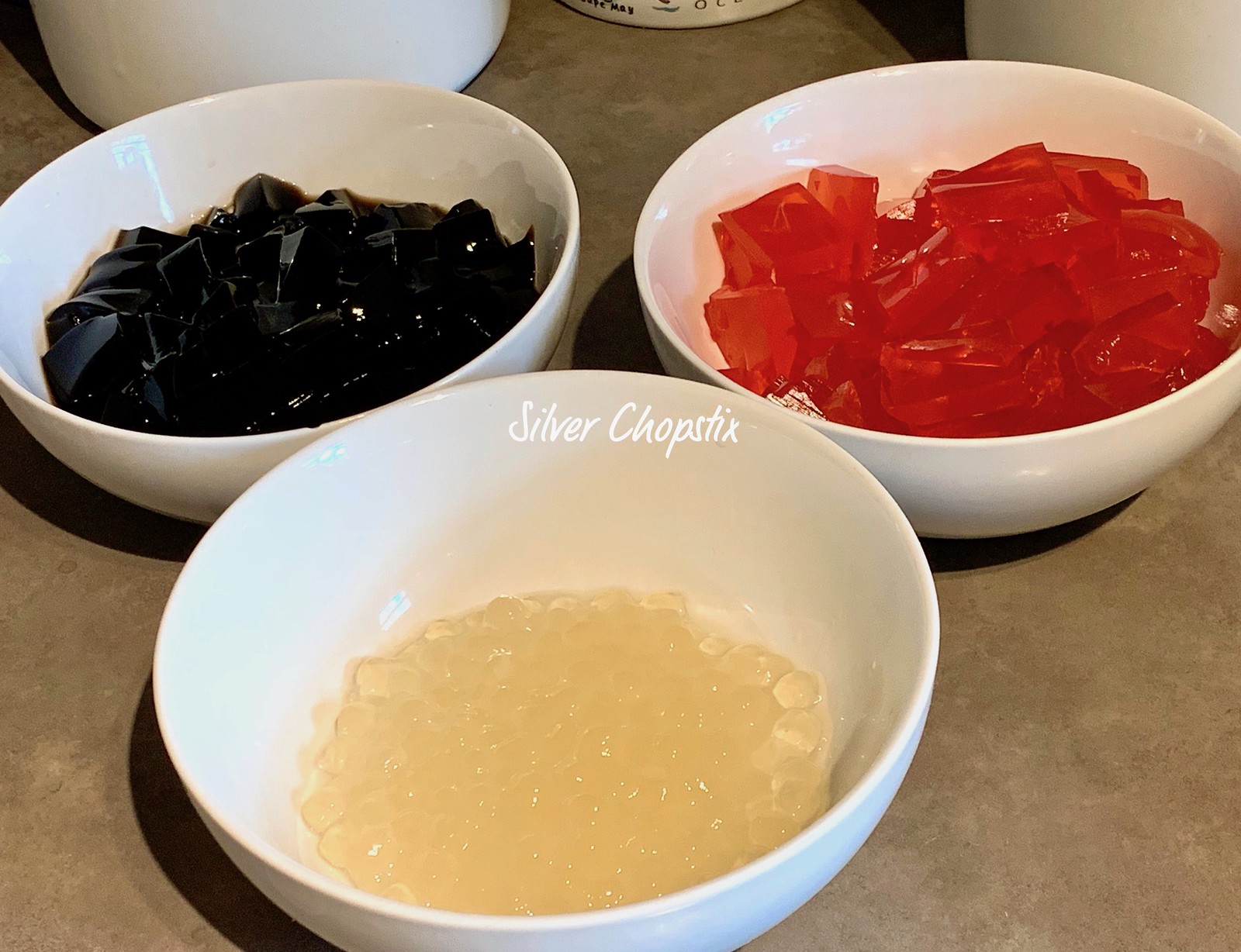 To assemble, get a tall glass and add 2 tablespoons black jelly, 2 tablespoons sago, 2 tablespoons gulaman (jelly). Fill your glass with shaved ice and pour some of the arnibal to sweeten. You can add water to dilute your syrup. 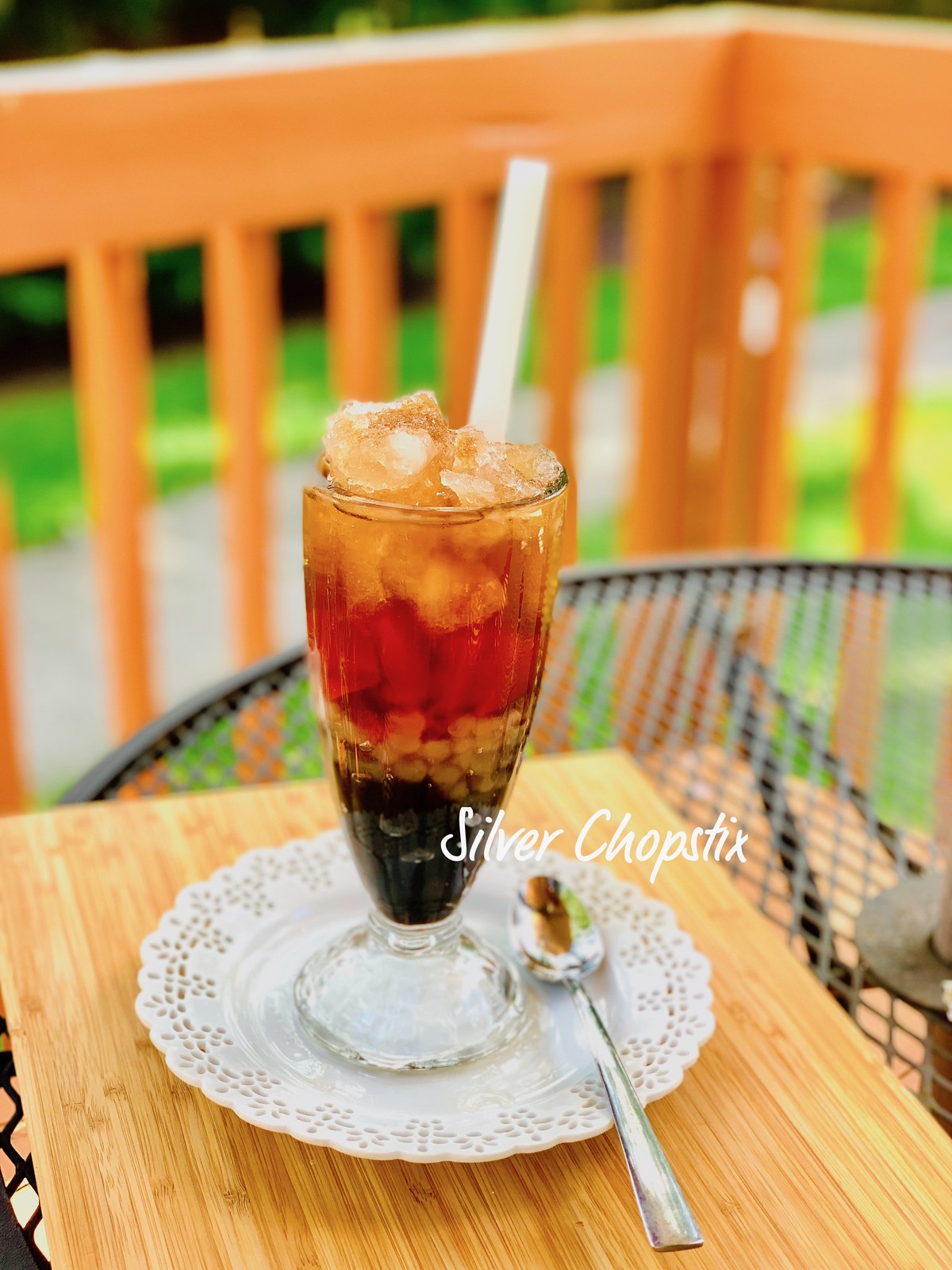 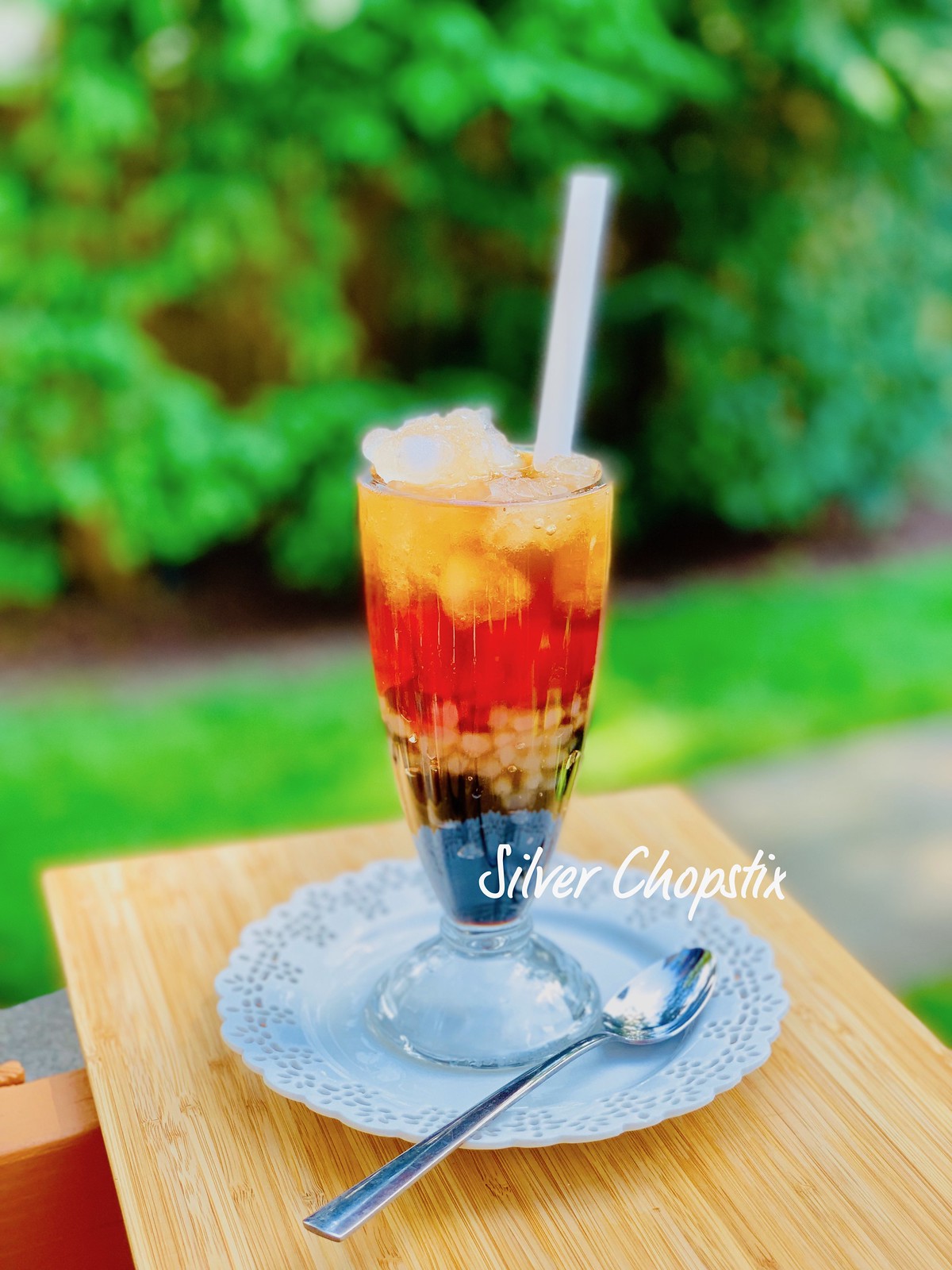